A lot of people have visions of scenes of the Exorcist when they think of possession. Actually, most forms of possession are not demonic. It is the takeover of one’s body by a non-corporeal entity.  Since ancient times, gods and other spirits have possessed people and interfered with human affairs. Possession is usually not wanted but many traditions view is as a great honor. Show here are some of the forms of possession. 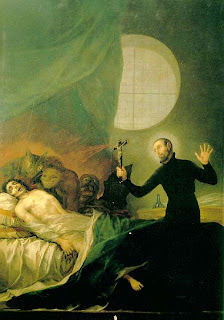 Demonic Possession: The demon takes up residence in a person’s body and controls (or at least influences) his or her thoughts, words, and actions. The demon can lay in hiding for periods of time, so the person seems normal and then the person will exhibit bizarre behavior. During these times the person in entranced and it may take time to return to normal. Usually, the person is under the sway of multiple demons. Demons stay in a person unless exorcised, causing strife and turmoil both in physical and mental health to the point of death, sometimes by suicide. According to the Catholic Church, possession can be caused by making pacts with the Devil or demons, playing with Oujia boards, or being the victim of a curse or spell. Signs of demonic possession are superhuman strength and levitation that is accompanied by fits, convulsions, or contortions, revulsion to holy objects, or knowledge of the future. It’s not just Christianity that holds to demonic possession, but cultures around the world believe it. It is a part of everyday life in Hinduism. The victim is usually a woman who sees her personal problems to be caused by evil spirits. In Japan, the kitsune, or fox fairies, are known to possess people. They will usually leave if offerings are made to them.

Possession by Djinn: A Djinn will possess a human out of desire or on a whim. It will attack the weak, vulnerable, and insane. Djinn’s will also possess those they feel have wronged them. The Djinn will make people babble, have supernatural strength, and run unnaturally fast.

Possession by the Holy Ghost:  After the Resurrection of Jesus, the apostles became possessed with the Holy Ghost. Flames appeared above their heads and they spoke in tongues they didn’t know. These types of possession are all voluntary and are considered a “religious altered state of consciousness.”

Spirit or Deity Possession: In many Non-Western cultures and shamanic traditions, voluntary possession is used to communicate with gods and spirits for help in solving problems or divining the future. Possession by a god shows the possessed is worthy of that god’s attention and is a great honor.  Vodun is a good example of t religion that practices such acts. Their religious practices feature rites where the loas are invited to possess. The possessed lose all consciousness, completely becoming the loa.

Mediums: The fascination with the afterlife is still strong today. During the 19th century, the medium religious movement spread like wildfire. These people, believed to have the ability to contact the dead, would perform séances where they would give their bodies up to the dearly departed. Many of these were fake, but the practice still continues to a much lesser degree today.
Posted by Noree Cosper at 12:00 AM