Beware on the high seas for the Flying Dutchman, mateys. All right, it’s not actually Davy Jones’s ship, but it is a rather famous ghost ship with several variation of the legend. 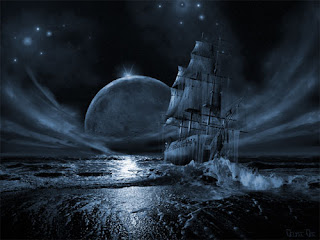 In the Dutch version, Captain van Straaten vowed to sail around the Cape of Storms, now known as the Cape of Good Hope during a bad storm. The ship was lost and it is said the ship and its crew of dead men are condemned to sail the spot forever.  Seeing their ship during stormy weather is an omen for disaster. The Germans say the Captain was named von Falkenberg and the ship can be seen in the North Seas. In this tale, the Devil visited the ship often and played dice on deck with the captain for his soul. The captain lost, of course, and was condemned to sail the seas for eternity. Hmm, now I see where the movie got the dice game. In the British version, the ship was sailing in the Cape of Good Hope and a storm arose. The crew begged the captain to turn to a safe port, but he refused. He challenged God to sink his ship. Instantly an apparition appeared. The captain told it to leave, but it remained. So, he drew his pistol and fired on it. The gun exploded in his hand. Then the apparition cursed him and his crew to sail forever. In another legend, a goddess appeared on deck and was mistreated. So, she cursed the ship to sail until the end of days.

In 1923, a ghost ship believed to be the Flying Dutchman was seen by four sailors at the Cape of Good Hope. According to the fourth officer, it was seen 15 minutes past midnight, which is supposed to be the witching hour.

Have you ever seen an apparition? Perhaps not a ghost ship, but something else?