A-Z Blog Hop: Devil Made Me Do It

Grab your crosses and bible folks. Today we’re going to be talking about the Devil. Now, before you get upset it’s always good to know your enemy. You can fight against it better if you have knowledge. So, let delve into the depths of darkness and meet the Devil. 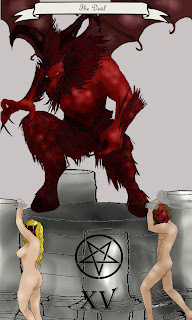 So, the term devil is derived from the Greek diabolos which means slander or accuser. This word actually came from the Hebrew word Satan. Now, according to Hebrew lore, Satan was an angel, the tempter of humans. The Devil evolved over the centuries from Satan, Lucifer, and the pagan deities Pan or Cernunnos.

In many religions evil is represented in the form of gods that are not wholly evil. As Christianity spread, these gods became devils or evil and were some of the beginnings of the Devil himself. For instance, The Egyptian Set personified more of a dark side than many of the other. As the evil brother of Osiris, her represents chaos and destruction. Added in were a few demons from other cultures, like the offspring of Tiamat from Mesopotamia.

One of the most interesting predecessors would be Angra Mainyu or Ahriman of Zoroastrianism. He is the personification of evil, the exact opposite to Ahuru Mazda or Ohrmazd who is the personification of all good. It is said that Ahriman will be defeated by the coming of the Savior. Yes, there are a lot of parallels between this, Judaism, and Christianity.  Even Islam has something like it. It is a Djinn known as Iblis. Both Zoroastrianism and Iblis will have their own posts later this month.

In the New Testament of Christianity the Devil becomes more personal and is represented as an antagonist of God. He has legions of fallen angels that are not turned demons and is poised to wage war on God. Jesus, the Son of God, is sent to Earth to defeat him since the Devil had power over the physical world. In Revelations it is said that Christ will return to defeat the Devil and bind him for a thousand years before destroying him. And thus, the dualism of Christianity has come to be, with a god of light and and god of evil and darkness.

In A Prescription for Delirium, devils are the Fallen Angel. Yes, Lucifer is among them, so he can be considered the Devil, but the book doesn't focus on him. The difference between demons and devils in the book is their origin. However, it doesn't
matter as much to Gabby. She’s willing to kill both and in large numbers.

I love hearing from you. Are there any gods from mythology that you think may have attributed to the Devil?


Do you like stories about angels, demons, and the supernatural? Pick up a copy of "A Prescription for Delirium" available on Amazon, Barnes & Noble, and Smashwords.
Posted by Noree Cosper at 12:00 AM