A-Z Blog Hop: Angels Among Us

“And flights of angels sing thee to thy rest!” –Hamlet by Shakespeare 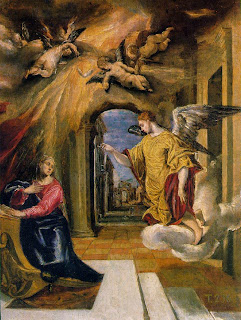 We all know of angels right? Those invisible beings that watch over (or interfere, depending on your view) us throughout life.  They are the beings that mediate between us and God, and minister everything in the natural order of the universe.  Though angels exist in Judaism, Christianity, and Islam, they are connected helping spirits in mythologies throughout the world. Actually, the term angel stands for one class in the Angelic Orders. Today, we’ll just stick with the Christian version, because the others would make this more confusing.

Angel’s main job is to serve as messengers between Heaven and Earth.  Those prayers you whisper with your hands clasped and your eyes closed are delivered to God by angels.  They then give God’s answers in the form of inspiration. They also serve as Guardian Angels.  In Christianity, Angels are the lowest order of angels.  I know, it’s confusing, but have you read old Christian texts? They’re not exactly clear.
The next are the archangels, who serve as liaisons between God and mortals and are the supervisors of guardian angels. It is said that the archangels are the guardians to heads of state and other important figures. They are also in charge of heaven’s armies against the legions of Hell. Three of the most popular archangels are Michael, Gabriel, and Raphael. 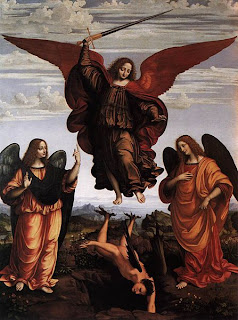 Principalities are the seventh highest order of angels. They watch over entire nations. Each principality is assigned its own nation to look after. Supposedly, they can help humans call on secret powers (superpowers anyone?) and help subdue others.

The Powers are responsible for fighting evil spirits who seek to cause mayhem through humans. They protect the divine plan initiated by the Dominions (we’ll get to them) and performed by the Virtues (they’re next).  Pretty much they seem to be the Navy Seals of angels.
The Virtues primary duty is to perform miracles on Earth. They also provide grace, courage, and valor. God governs the seasons, elements, and heavens through the virtues even though lower angels have direct responsibility for the tasks.

The fourth highest order is the Dominions. They proclaim the orders of God and regulate the duties of the other angels. You could say they’re middle management.  They are also the angels of mercy.
Next up, the thrones are God’s living beings of justice and authority. Interesting enough, the thrones are depicted as wheels with many eyes and reside in the cosmos where material form begins to take shape.
The Cherubim are not the cute little cherubs you see pictures of. They guard the way to the tree of life in the Garden of Eden. They’d be God’s secret service so to speak. Cherubim have four faces and multiple sets of wings. Do you Zachariah in Supernatural? The way he described himself, he would have been a Cherubim.
The highest order is the Seraphim. They are the caretakers of God’s throne and shout praises of "Holy, holy, holy is the Lord of hosts. All the earth is filled with His Glory." The Seraphim have six wings, two cover their faces, two cover their body, and two cover their feet.

So, there you have it. Heaven runs a lot like a nation, with the lowest order still the hardest working one.  Are there any particular orders you like best? In A Prescription for Delirium, my order of angels is really different from this. There are seven archangels and the rest of the Host is under each of them.