Angels descended from heaven to watch over humanity. As they did this, their lust for human women grew and they bred with them. The result was the Nephilim, who were supposedly giants.  Nephilim means “fallen” or “those who were cast down.” In Genesis 6:4, however, it’s suggested that the Nephilim were around before the angels descended.  It states: “They were the mighty men that were of old, the men of renown.” 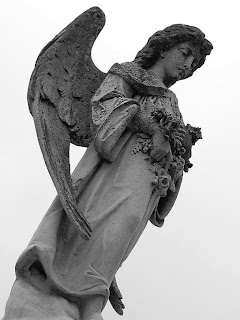 God grew angry at the corruption that spread from cohabitation of angels and man. He decided to destroy not only the humans but all life on earth. He chose Noah and his family alone to survive the Flood. And it rained for forty days and forty nights.

However, not all the Nephilim perished. They have been mentioned throughout other books in the bible. In numbers that are the Anakim, so big that the men are like grasshoppers. Enoch 15:8-9 states that they shall be called evil spirits on earth and they will dwell both on earth and in the earth, making them demons.

Nephilim play a large part in the book I’m currently writing (Book 2 of the Van Helsing Organization) but they are not the giants as mentioned in the bible. Nor are they evil. They can be the children of angels, but some can also be considered the children of other pantheons. The Greek heroes would have been Nephilim in my mythology.