So, I was going to do lycanthropy today, but I changed my mind when I read about this myth. You see, I love Greek and Roman Mythology. OK, I love lot of mythology, but they would be my favorite. Today’s post still has to do with wolf-men. It’s the story of Lycaon.

This story comes from Ovid’s Metamorphoses. You see, Jupiter (Zeus) was angered at the murder of Julius Caesar and the increasing wickedness of the human race. So, he did what he was known to do. He took a human guise and traveled around to check on the state of affairs. One night he entered the home of King Lycaon who was known to be an inhospitable tyrant. Jupiter revealed himself as a god and the people bowed to him, except for Lycaon, who laughed in disbelief.  He proposed a test to determine if Jupiter was truly a god.

Lycaon took a hostage that had been sent to him by the Molossian people and killed him. He then cooked and served his limbs as food for the god. When Jupiter saw this he became enraged and destroyed the entire house with fire. Lycaon escaped the flames, but not Jupiter’s wrath. For his crime, the Lycaon was turned into a werewolf.  Ovid describes his change as:

“There he uttered howling noises, and his attempts to speak were all in vain. His clothes changed into bristling hairs, his arms to legs, and he became a wolf. His own Lycaon savage nature showed in his rabid jaws, and he now directed against the flocks his innate lust for killing. He had a mania, even yet, for shedding blood. But, though he was a wolf, he retained some traces of his original shape. The greyness of his hair was the same, his face showed the same violence, his eyes gleamed as before, and he presented the same picture of ferocity.” 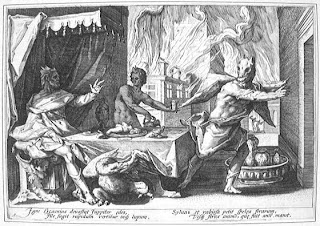 This myth is possibly connected to the cannibalism practiced in the cult of Jupiter Lycaeus. The cult believed a person who ate human flesh was turned into a wolf and spent ten years in the wild. Afterwards, they could take human form, but only if they consumed no more human flesh.  This is a pretty interesting myth for where werewolves came from.

Do you know any myths in other cultures about the origins of werewolves?