First off I wanted to let you guys know I will be late with my post this week. I have two scenes left to finish on this rewrite. As a reward I will write a post about the main character: Gabby.

Now, I have received the Liebster Blog Award by Kayla Curry on her blog. She's the awesome author who's organizing the Book Blogger Fair. Thanks Kayla for choosing me! Now for the rules:

The rules for the award:

And the award goes to:

Review: A PORTRAIT OF ALATIEL SALAZAR 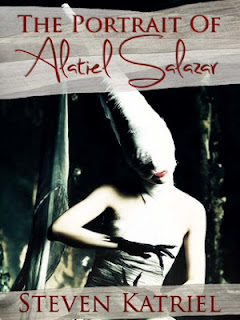 Premise (Taken from Goodreads): When Gabriel Holland’s beloved Helena vanishes from his life, he journeys to the home of disgraced artist Cristian Salazar, the man he holds responsible for her disappearance and the death of several friends. Once in the town of Carliton, Gabriel finds only malice and mystery in the tales told by the few brave enough to speak ill of Salazar and the sinister Cousin Beatriz. And within shadows, in the guise of night, walks Alatiel, the creature Helena has become. . . .

Disclaimer: A Portrait of Alatiel Salazar is a Gothic Horror novella. It is for a niche audience and not what I am used to reading. So, if you read more of this than i do you may have a differing opinion. This was given to me for a fair review by Steven's publisher Immortal Ink.

Writing Style: Mr. Katriel's choice of wording and voice give a very creepy overall feel throughout the book. He sets the horrific ambiance well. The novella is written in a Victorian style which is around the time the story is set in. I would have to say this is my favorite part about the story.

Characters: Even in the beginning which focuses on series of journal entries you can still get a feel for even the tertiary characters. My heart aches for Gabriel and what he has to endure throughout the novel. Alatiel is intriguing and horrifying all at once.

Confusion: This may be because I am used to reading more fantasy, but I never really understood what Alatiel or a few of the other characters were. The is a point in the story where another character tells Gabriel what he knows of them, but this still only gives me a very vague sense. Also there were a couple of times that I got confused at what was going on in the story. Still this may be because I don't read a lot of this type of story. The ones I have to compare to are Dracula and a Picture of Dorian Gray. Those two stories I knew before I read the books, so it may just be me.

Overall: I would definitely recommend this book, especially is you want something to run chills down your spine in cerebral way. There or no cheap thrills in this book.

Be sure to check out Steven Katriel's webpage for a few previews as well as other goodies.

Welcome, fellow hunters. We will be discussing types of weapons used on supernatural beings. Today's topic will be:

So, you're out hunting that vampire because you have no chance to wait for it to sleep during the day (if it does). You don't want to get close, all that biting and loss of blood, you know. Your armory is open. Choose your weapon.

A compound bow is a modern bow that uses a systems of pulleys and cables to bend the limbs.

Advantages: First off, the bow is easier to draw. It doesn't have a crank or lock to worry about. All you need is your arm. The form is simple and light which makes the bow less cumbersome to carry on your hunts. Compound bows have less recoil than that of other bows. The accuracy is good due to a consistent archer point and a string loop system. The arrow sits on a string loop and it is the same point every time. The maximum range is longer for a compound bow.

Disadvantages: The compound bow takes longer to master. This can be months, even years.

A crossbow is a weapon consisting of a bow mounted on a stock that shoots projectiles, often called bolts or quarrels.

Advantages: The crossbow is relatively quick to learn, you could master it in under an hour. The most difficult aspect is to make sure the bow is cocked perfectly strait so the arrow does not stray. The weight of a crossbow is distributed evenly so you can hold it at your shoulder for a longer period of time. The quarrel can be locked and loaded ahead of time in preparation for your shot.

Disadvantages: Compared to the bow, a crossbow is heavier overall and clumsier to carry around. This can impede you when your on the move after that vampire. The rate of fire is slower and you have to reload and lock the cross bow, unless you have a repeating crossbow.

What weapon will you choose?

Want to read about supernatural hunters? Check out A Prescription for Delirium available now on Amazon, Barnes & Noble, and Smashwords.
Posted by Noree Cosper at 7:04 PM 33 comments:

Review: EYES OF THE SEER 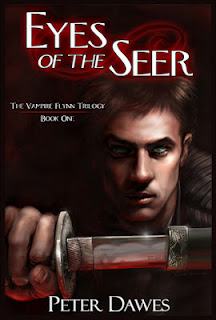 I first met the author in a twitter discussion that inspired my "Lusting for Bloodsuckers" post.  If you are not, you need to follow @PeterDawes on Twitter. Yes, the author has penned his books under the name of the main character. He said once that Peter felt he needed to tell his own story. Also, check out his blog. It's an excellent read, and an easy way to distract yourself from writing, which I have been guilty of.

It all started with a murder. Two victims lay dead at the hands of Peter Dawes, but what laid in wait for him was not the sound of sirens or the banging of a gavel. It would turn a doctor into a killer and a man into a monster.

Follow Peter as he exchanges his blood-stained clothing for tailored suits, his scalpel for fine-crafted daggers, and reinvents himself as the newest vampire-child in a coven of decadent sophisticates. He even takes on the name ‘Flynn’ - a child of red - in honor of his new-found devilish side, and to remove one of the last tethers to his human past.

For four years, Flynn embodies every bit the bloody immortal he was sired to become. Under the reign of his maker, Sabrina, he establishes a reputation as the most feared assassin to ever terrorize the covens of Philadelphia. But the surefooted-steps and quick hands that make him a virtuoso when it comes to killing humans and vampires alike are a mark of the mortal destiny which haunts him even beyond death. And despite his efforts, Peter’s humanity is not as dead as some would prefer.

On the verge of completing their vie for power, Sabrina’s ‘dark-killer’ will suddenly find himself at odds over his devotion to his mistress when an impish sorceress named Monica awakens the hidden powers he was destined to possess. In this world of macabre and shrewdly practical immortal beings, will Flynn’s supernatural gifts be used to orchestrate the wicked deeds of his maker? Or can the cold-blooded nature of a vampire be warmed by the compassion of a Seer?

EYES OF THE SEER is a gripping tale conspicuously authored by Peter Dawes - years later, he's decided to put the story of his life to paper, albeit listed as 'fiction'. (Vampires can't really claim to exist, after all. It would ruin the whole gig.)

The Vampires: If you have read my blog about vampires you know I am wanted to see vampires as monsters depicted in novels again. Or if they want to hold onto their humanity, I want to see a struggle. This book gives me both is spades. Though the vampire mythos is standard, because they are depicted as monsters makes it even better.

Voice/Writing Style:  One word comes to mind: elegant. It flows so easily that my eyes devour the next sentence and the next. I can never call my style elegant, but I truly admire those that can achieve this.

Characters: This was defiantly a character focused story and not plot focused. Every character is well defined, even the tertiary characters. I could see their own motivations and. even though the story was in first person, I felt that each character acted like they were the hero in their own story. Peter takes me down to the pit of depravity and then brings the light with his quest for redemption. Monica was sassy and smart and I loved Robin.

Point of View: The story is really a psychological journey of Peter, so I like that is is written in first person. I takes so deep into Peter that we can feel his struggle. Though, i'm a big fan of First Person anyway.

Themes: This book really explores humanity, and the struggle of one's self. Peter struggles reconciling the man and the monster throughout most of the book. Also, on a more subtle level is the question of freedom. Are you responsible for the deeds you have done if you were manipulated? The author presents both of these theme beautifully.

Action: Vampires fighting vampires. Let me just say that this is not a book you should let your kids read. It is dark and it is violent. I love it.

The Bad: I really don't have much to say about this. Yes, the beginning started off a little slow, but it built up to the end, which was well worth it. When I got to the last few pages I wanted more.

Overall: You should buy this book! Seriously this is a hidden jewel that needs more light.