People often mistake Beelzebub as another name for Satan, or Lucifer. Actually they are three separate entities. We’re going to focus on Beelzebub for this post. He is a Prince of Demons. There is some contention to whether or not there are other princes. 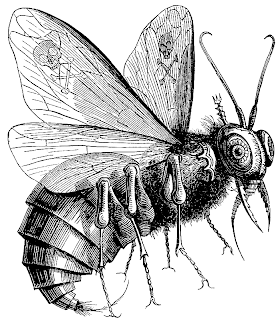 Beelzebub is a distorted version of the Canaanite god “Baal-zebul” which means “Lord of the Divine Abode” or “Lord of the Heavens.”  His name got twisted to mean “Lord of the Flies” and he became a demon. The Prince of Demons had been depicted as a giant fly or a huge monstrous creature that sits upon a giant throne.
So, where did he get his title? According to Hebrew belief, he was the Prince of Demons during the time of Jesus. The Pharisees actually accuse Jesus of exorcizing demons in Beelzebub’s name. At the time, it was believed that the only way to expel unclean spirits was through pacts with demons.

Solomon supposedly bound Beelzebub at one point, with the help of his magical ring. It is from Beelzebub that Solomon learns that demons supposedly live in stars. Beelzebub claimed to be the chief angel in heaven and the last of the fallen ones.  Solomon told him to cut stone, to which the demon protested that it’s such a menial task for so great a demon. Solomon offered him his freedom if will tell of other heavenly things. Beelzebub told him he could strengthen his house by burning oil of frankincense, myrrh, and saffron and lighting seven lamps during an earthquake. Solomon didn't believe him and ordered him to cut marble.

The Gospel of Nicodemus, an apocryphal text, describes how Beelzebub came to rule over Satan. Supposedly, Satan bragged that he was going to take Jesus to Hell after his crucifixion.  Satan wanted revenge for all those embarrassing moment he lost to the Son of God.  You’d think he would have learned. Beelzebub knew that Jesus was too powerful and begged Satan not to do it. But, evil is arrogant. So, Jesus arrived. Beelzebub pushed Satan out and barricaded the gate. That didn't stop the Holy One.  He trampled Satan, broke the barricade and released the trapped saints with a word.  They immediately went to Heaven with him. Yes, Jesus pwnd Hell. Afterwards, Satan told Beelzebub that he would serve him forever.

Do you like stories about angels, demons, and the supernatural? Pick up a copy of "A Prescription for Delirium" available on Amazon, Barnes & Noble, and Smashwords.