Long ago when the world was a lot younger that it is now, the Greeks walked around in their togas wax rhetoric and worshiping their gods. They didn't speak of the things below out of fear it would bring their attention. One of things was the empusa.

The empusa is considered to be a vampire but is more of demon because it is not undead. It has no shape of its own; instead it has many guises, such as a beautiful young woman to lure its prey. It enters the body of its victim and consumes the flesh and blood. 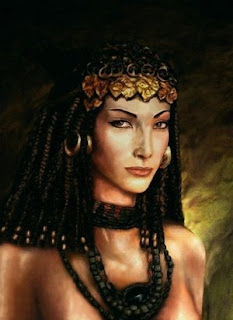 The most known story appears in The Life of Apollonius of Tyana by Philostratus.  Apollonius was a philosopher and willworker who was believed to have performed great feats of magic.  The story starts out with a young man named Menippus who met a beautiful woman as he walked along the road to Cenchreae. She was an empusa, of course, and he fell under her spell. Apollonius was skeptical and attended their wedding. She claimed to be the owner of the gold and silver trappings of the house as well as the servants. Apollonius revealed that she was a vampire intent on devouring Menippus. It broke her spell and all her gold, silver, and servants disappeared.  She weeps and begs Apollonius not to reveal her true identity but he does with his awesome powers. She admits that she was luring Menippus in order to eat him. And so he is save from a horrible fate.

Are there any types of vampires or demons that are your favorites?