My Author Page is Live

This week is a bit late because we were working on the whole point of this blog. I am pleased to announce that my author website is now open for your entertainment needs. Don’t worry, this blog is NOT going anywhere. It’ll just be linked to more awesomesauce.

Here I plan to continue with more tales about creatures, gods, and magic. NoreeCosper.com will have more information about my writing projects, especially “A Prescription for Delirium” (Remember: It comes out December 1st.)

The website will also have fun little facts about my world and the characters in it as well as a playlist.(Coming soon)

Be sure to keep an eye out for my upcoming book trailer and cover reveal.  Also, if you haven’t yet, be sure to enter my giveaway.
Posted by Noree Cosper at 1:18 AM 5 comments:


This is going to be a double blog. First of all I would like to announce that my blog has reached over 10, 000 hits! And since I love all of you, I'm giving away a prize. Below is the lovely Rafflcopter where you can sign up. The prize is an e-copy of "Flower of Hell."

Secondly, I'm continuing the series I started last week. This segment of Strong Women of Legend and Lore features Inanna.

Inanna is the Sumerian goddess of sexual love, fertility, and war. One of the most famous stories is her descent into the Underworld. Inanna tells the gatekeeper that she wishes to attend the funeral of Ereshkigal's (Ruler of the Underworld) husband. The gatekeeper informs Ereshkigal and she is suspicious of Inanna's intentions. You see, Inanna came dressed in the nines (A nice dress, a necklace of Lapis Lazuli, her own magic rod...you get the picture.) All of these were representations of her power and not suitable for a funeral.

Following Ereskigal's instructions, the gatekeeper tells Inanna that she may enter the first gate but she must hand over her lapis lazuli blasting rod. (heh, Dresden joke) When she asks why she's told that's how things are done in the Underworld. So, she does it and passes through the gate. This happens six more times until she stand before Ereshkigal, naked.

She sits in Ereshkigal's throne and faces the Anna, the judges of the Underworld. Their look upon her is death and their words, anger. She is reduced to a corpse and hung on a hook.

After three days, Inanna's messenger goes to three gods for help. The first two deny her. However, the third Enki, agrees to help. He creates two figues to appease Ereshkigal and instructs them to ask for Inanna's corpse. They are to ask for nothing else else. Once they have her body they must sprinkle it with the food and water of life.

When they arrive at Ereshkigal's throne to find her in agony like she's in childbirth. She offers them anything, including life giving rivers and fields of grain, if they can relieve her. They help but only ask for Inanna's corpse. They sprinkle the food and water of life on the body and Inanna is returned. However, she is followed by Ereshkigal's demons. They tell her someone must take her place but she refuses to let them take her servants, because they were loyal and mourned her.

Inanna comes to her husband. Instead of morning her, he is dressed in finery and napping in a tree. Enraged she points her finger and tells the demons to take him. You know what they say about an angry woman.

Before I let you think that Inanna was a damsel, she had to foresight to order her servant to ask for help if she didn't return. She went to the Underworld to take over, but knew the possibility of failure. Preparing for you limitations is an aspect of strength.

And now for the Giveaway, they are a lot of chances to win. The biggest would be leaving a comment below. Who do you think is a strong female character in legend or lore?

a Rafflecopter giveaway
Posted by Noree Cosper at 2:19 AM 8 comments:

I've been tagged in the "Look Challenge" by Brandon Luffman. Here's the way it works: You take your current manuscript and find the first instance of the word “look”. Then you post the surrounding paragraphs as an excerpt of the book on your blog. Lastly, you tag five more blogging authors who you think would be a good choice for the game.

Since, I have gone back to editing "A Prescription for Delirium" and this would be a great time to give people a snippet, that's what you're getting. Amusingly enough, it was the first page of the first chapter.


Not five minutes in this backwater town and I had a demon sniffing my trail. He scanned the room with the nostrils of his wide nose flaring. His hair plastered against his forehead in greasy brown locks. He towered over everyone else, even the people standing, as he squeezed between the large round tables and the gathering at the bar. The frayed threads of his jeans and his leather vest matched the dress of the rest of the roadhouse.

I lifted my drink to my mouth and shifted to my second sight. Most people say the eyes are the windows to the soul. Those people can’t see auras. The lights on the walls dimmed and the air took on a gray haze, like I was looking at things under water. Colors bloomed out from each human in the building, blending together in a rainbow. The demon was another matter.
The shaggy black dog the size of a pony stood semi-imposed on all fours over the form of the man. Flames blazed from its eyes as it scanned the room. Was there really a dog walking through a busy Texas bar? No. Demons had no corporeal form and had to possess physical bodies. This one chose a werewolf. Dio, I had a hellhound on my ass.
Talk about bad timing. I came here to kill a devil though. Ose already had some of his minions patrolling. If it found me, it would go running to its master to let him know I was in town. My hunt was in danger of ending before it even started.
Breathe Gabby.

"A Prescription for Delirium" is scheduled for release on December 1st. Coming Very Soon: my website where you'll be able to sign up for a newsletter that will have great giveaways and fun stuff as well as news on my works. Anyway, my chosen five authors are:

Jeanne d'Arc: Of Cross and Steel 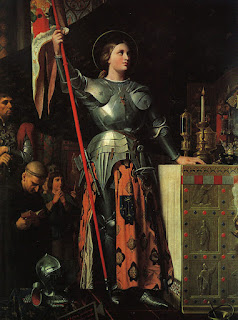 Hello lovelies. So, this is actually going to be a series. I’ve connected it to a couple of guest posts that should show up on JessicaFortunato’s blog and Rebecca Hamilton’s blog. These are the strong women of history and myth. Since Gabby has sight powers, I decided to post about Jeanne d’Arc. 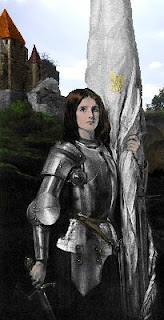 Jeanne grew up in Doremy, France. She started having revelations from God when she turned 13. Over a five year period the voices instructed her to lay siege at Orleans. I suspect that during these years they were also teaching her how to do so.

She tried on several occasions to speak with the Dauphin Charles but was refused. Perseverance finally won, because he did eventually agree to see her. He had her tested by the clergy and satisfied by the truth of her abilities he let her lead. OK, can you imagine the weight of that? An 18 year old girl was in charge of the armies assigned to take back Orleans.

Orleans became theirs in ONE week. Charles was crowned King of France and he stopped listening to Jeanne’s advice. She continued to battle until she was captured in Burgundy. The Duke of Burgundy held her for a year before turning her over to the English.

They condemned her for witchcraft and heresy. Eventually she confessed and was absolved of her sins as long as she promised not to engage in acts such as wearing men’s clothing (Note to the ladies: According to the bible, wearing pants in an abominations right next to eating shellfish and homosexuality.) Jeanne later relapsed, She was found dressed as a man and listening to the voices again. So, the English burned her as a witch and a heretic. All for pants. 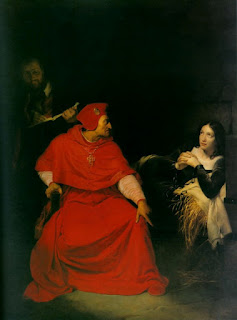 Joking aside, What Jeanne d’Arc accomplished is pretty amazing despite the obstacles she faced. Even the strong have moments of weakness, but they can overcome them.

A few weeks ago I hosted Thomas Winship here. He was kind enough to talk about his Vaempires. Well, I am pleased to announce the cover reveal for his next novel. Once again Thomas lays out a nice simple cover. I really love the zombie hands. 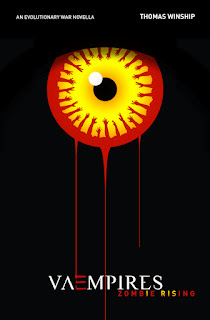 Væmpires: Zombie Rising
The tale of The Evolutionary War resumes in Væmpires: Zombie Rising.
Væmpires have taken control of twelve major cities. Their leader, Vielyn, seeks the atomic weapons that will bring the rest of the world to its knees.
Vampire forces are reeling. As Linq and Ray race to the royal estate to rendezvous with Cassandra and Daniel … the princess is captured and Daniel falls.
With the fate of world shifting to their teenage shoulders, Linq and Ray must deal with tremendous losses while battling a most unexpected—and undeadly—new foe. 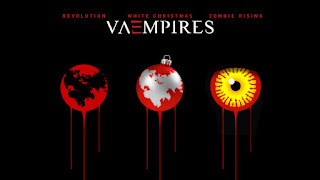 Thomas Winship lives in New York. He holds an MBA in Management from St. Thomas Aquinas College, where he serves as MBA Director and adjunct professor of courses in English Composition, Communications, and Business. He also spent fifteen years working for a global pharmaceutical company, specializing in organizational development, talent management, and training.

Tom writes in his spare time. His first novel, a mystery/legal thriller entitled Temporary Insanity (a.k.a. Case Closed), was a 2008 finalist in a national contest but failed to garner industry attention. He published Vaempires: Revolution last October and a follow-up novella, Vaempires: White Christmas, in December. He is currently working on the next installment of the Vaempires series.

Tom is an avid collector of books, comic books, music, and movies. His interests are diverse—on any given day, Tom is likely to be found watching a horror movie, attending a hard rock concert, or enjoying a Broadway show.

Væmpires: Zombie Rising will be released in October 2012. However, you can view the book trailer and read the entire book during the Dark Mind Book Tours pre-release tour that begins September 10th. Details announced soon!
Posted by Noree Cosper at 10:02 PM 1 comment: