Fractured Truth, the final novel in the paranormal, YA Fractured Light trilogy, was just released! Follow the blog tour to find out more about Fractured Truth and enter below for a chance to a signed copy or a $25 Amazon gift card! 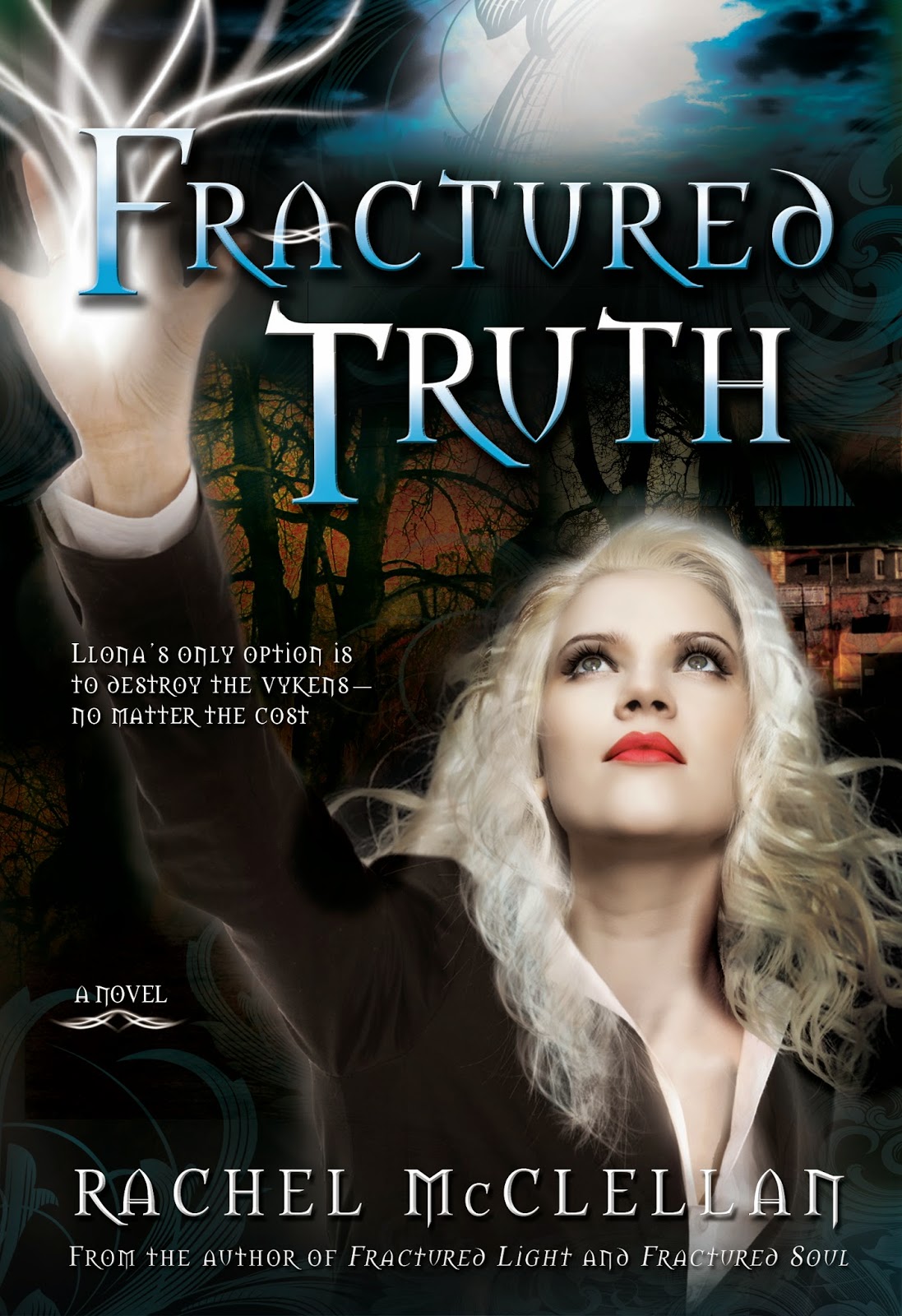 Llona is determined to end the fight with the Vykens once and for all. All she needs is to find and destroy the Shadow—the ultimate source of dark power. But when she makes a startling discovery about someone she loves, Llona has to fight the toughest battle yet in this exciting conclusion to the Fractured Light series.

Noree's Review: This series quickly moved up on my list of favorites. I have been waiting with semi impatience for this book to come out. I’m glad to say I wasn’t disappointed. This story is full of twists, turns, and heartbreaks.

The story starts out with a bang and just keeps running from there. Old friends are enemies, and you’re not sure who Llona can trust. McClellen introduces us to the new supernatural beings and we get to see more in depth about the creation of the Shadow.  Llona herself is still as headstrong and feisty as ever. I love that about her. She’s so determined to save the other Auras. I love how her strength affects the other girls around her.

This book had me reading into several late nights. Get it!

If you haven’t read the series, here are my reviews for the first and second books.

Blurb:
Llona Reese is used to living on the run. After the Vykens killed her parents, she knew they would eventually come for her too. She can’t take any chances. But when she starts to make friends for the first time in her life, she gets careless and lets her guard down. Big mistake.

As an Aura, Llona can manipulate light and harness its energy. But if she wants to survive, Llona will have to defy the Auran Council and learn to use her power as a weapon against the Vyken whose sole desire is to take her light. Now she’s caught in something even bigger than she can understand, with a power she can’t wield, and no one she can trust, except, just maybe, a mysterious stranger.

In this breathtaking and romantic adventure, Rachel McClellan delivers a truly mesmerizing story that will keep you guessing to the very end.

I LOVED the concept of primordial forces given consciousness that was in this book. I have to say that MccLellan's idea stands out. Yes, they’re a type of vampire here, but 1) their concept was also different, 2) they're monsters, which I always like to see. The pacing felt a little slow, but that may be because I prefer books with a faster pace. A lot of this book played up the struggling romance between Llona and Christian and stretched the suspense about who the Vyken was. Usually, I like a little more action in a book, but there definitely is some action in the end.

Blurb:
Llona will do whatever it takes to protect her new found friends and home, but the dark plot that is threatening Lucent Academy, a school that’s supposed to be a safe place for Auras, may be too powerful for even Llona to defeat. This fast-paced tale of love, loyalty, and overcoming the darkness will keep you on the edge of your seat until the last page!


So, this book starts off with Llona arriving at Lucent Academy. From the surface it seems that it’s a school for pampered girls with powers, so of course Llona stands out like a sore thumb there. I do always admire her rebellious side. That’s pretty much what drives her through this story.  I liked this book more than the last one. The pacing was better and it focused more on the paranormal instead of the romance.  Though there were times it did drive me crazy.

Click the pictures below to find out more about Fractured Light and Fractured Soul, book one and book two. 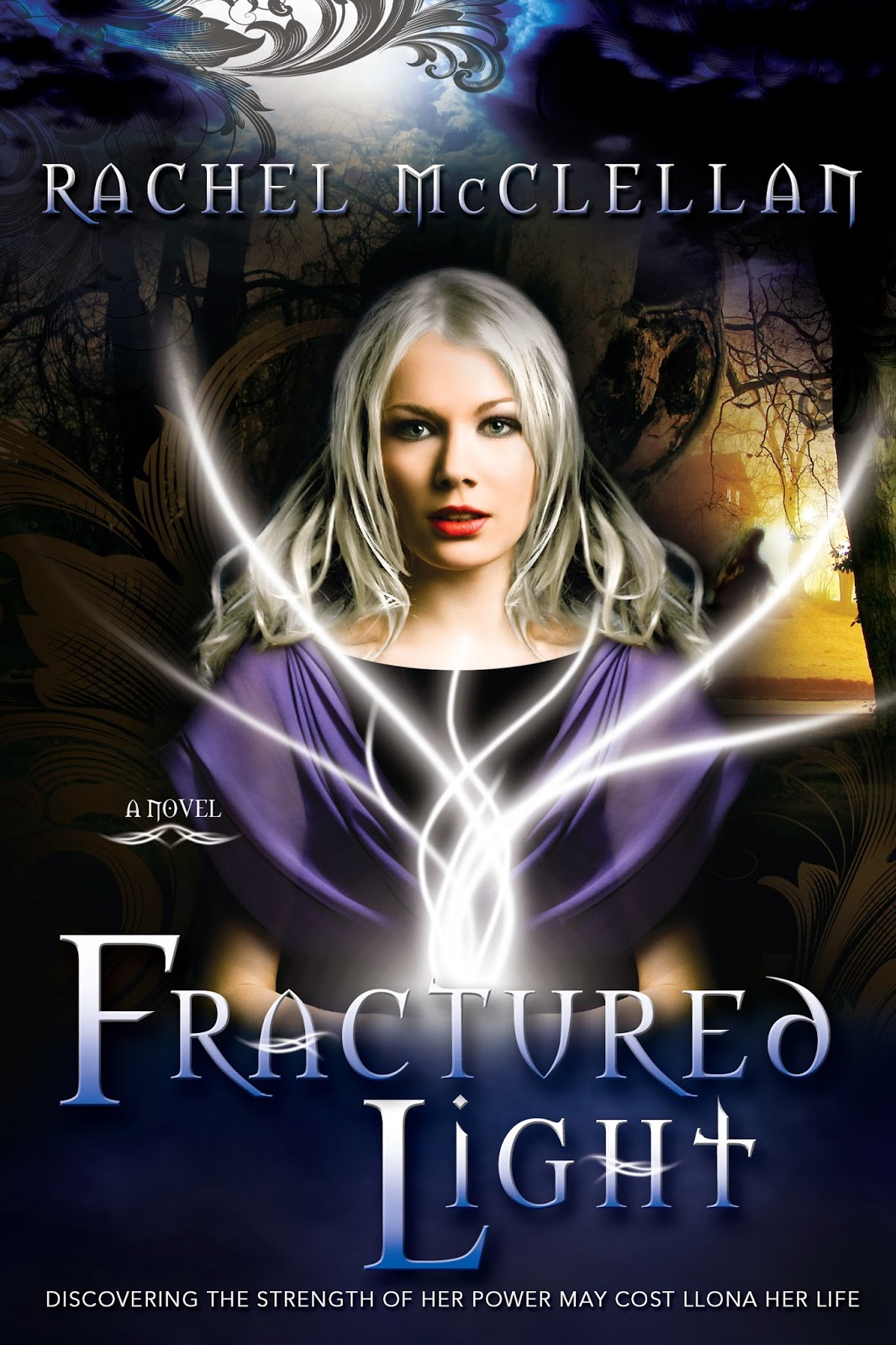 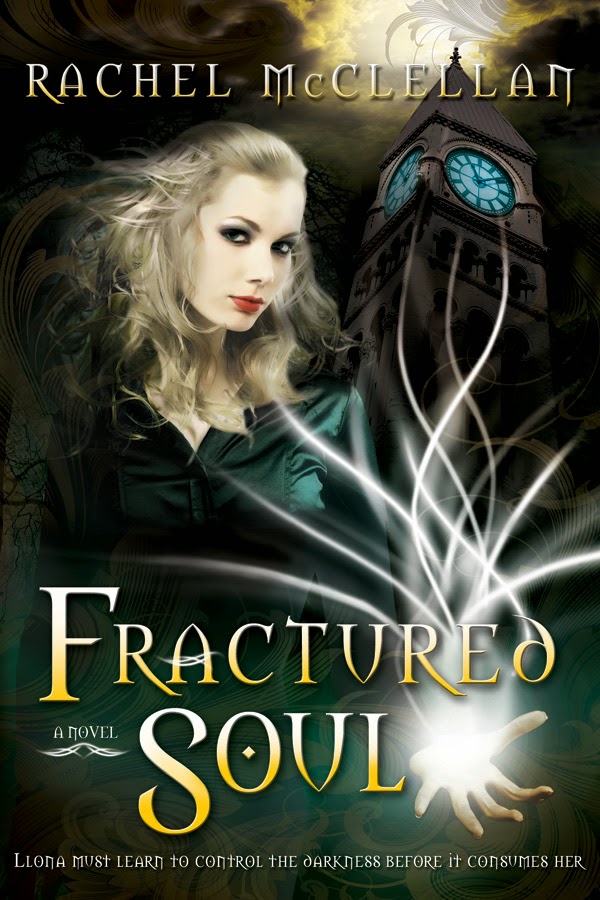 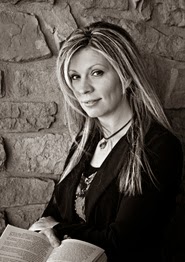 Rachel McClellan was born and raised in Idaho, a place secretly known for its supernatural creatures. When she's not in her writing lair, she's partying with her husband and four crazy, yet lovable, children. Rachel's love for storytelling began as a child when the moon first possessed the night. For when the lights went out, her imagination painted a whole new world. And what a scary world it was...

Posted by Noree Cosper at 12:00 AM No comments:

The Making of Nebraska Brown Review and Guest Post

Today I'd like to welcome Louise Caiola to Trip the Eclipse. Her new book The Making of Nebraska Brown has just been released. 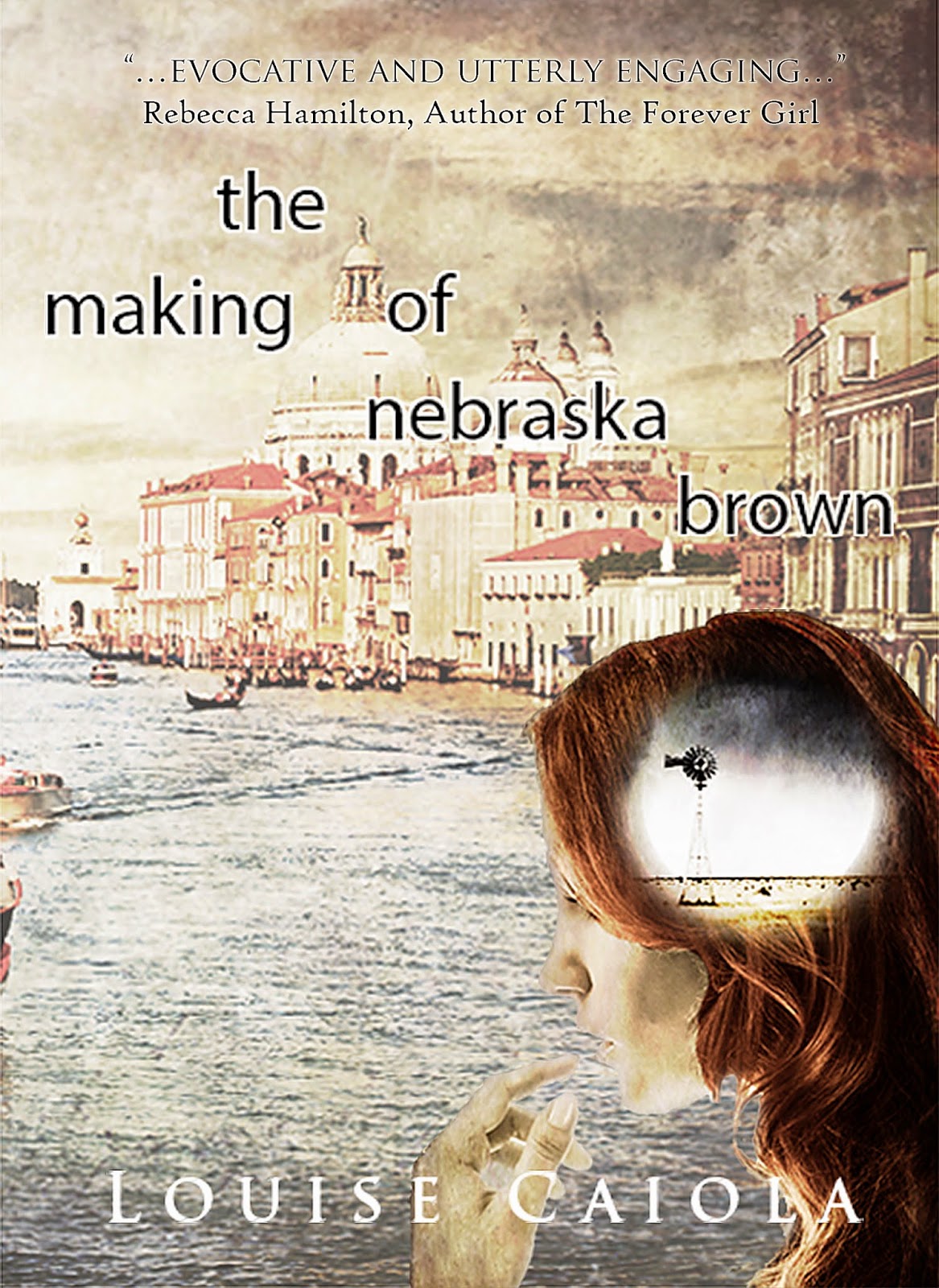 Blurb (From Amazon):
The last thing eighteen-year-old Ann Leigh remembers is running from her boyfriend in a thick Nebraska cornfield. This morning she’s staring down a cool Italian sunrise, an entire continent from the life she once knew. The events of the eighteen months in between have inexplicably gone missing from her memory.

All at once she’s living with Tommy, an attractive, young foreigner asking for her continued love. Though he’s vaguely familiar, she recalls a boy named Shane in America who she reluctantly agreed to marry. Juggling a new world while her old one is still M.I.A is difficult enough without the terrifying movie scenes spinning a dizzy loop in her mind: glimpses of a devastating house fire, a romance gone wrong, an unplanned pregnancy, and a fractured family – each claiming to be part of who she once was – a girl and a past somehow discarded.

Ann Leigh must collect the pieces of herself to become whole again, but she doesn’t know who to trust especially when Tommy’s lies become too obvious to ignore. And above all, her heart aches to discover what became of the child she may or may not have given birth to.

The Making of Nebraska Brown tells the story of one girl’s coming apart from the inside and the great lengths she’ll go to reclaim herself and find her way home.

Review:
This isn't my usual genre. As all of you who come to my blog know, I’m more a paranormal type of girl. However I found the story to be highly engrossing. We have a whole mystery to discover who Ann Leigh or Ana Lisa really is.

Ann Leigh has quite a few flaws. She’s spoiled, impulsive, and a bit brash, but I still liked her. She wasn’t going to let herself be sidetracked by the honeyed words of her boyfriend Tommy, especially when she suspected something was wrong. Tommy himself had me on ups and downs. I was torn between thinking her really loved her and that he was playing her in some way.

This book kept me reading into a couple late nights just so I can find out what truly happened. This one had me guessing until the end. If you like a cozy mystery and a story about self-realization, then you should really pick up this book.

The Making of Nebraska Brown is Published by Immortal Ink Publishing.

There's something inherently beautiful about the firsts of the world. I can rattle some right off the top of my head that are pretty dang cool. The first date followed swiftly by the first kiss.  First place (in pretty much everything.) First words. First steps. First birthday. First car. Okay, you get the gist.
But what about the writer’s first draft. His/her maiden voyage on the literary sea? How goes it?
Typically – not such a beautiful thing.
Most times the first drafts are fraught with plot holes, unintended character flaws, typos, grammar grunge and repetitive words enough to fill an entire second draft. However, there is something naturally pretty about this initial piece of work. Something joyful. Now, before you assume that I must be inhaling those glue fumes again, I will explain.
Let’s call it abandon. For some writers the first draft is where we get to clomp around in our mommy’s shoes. This is our chance to try the story on for size. To experiment with the phrases until we stumble upon the exact right ones. The first drafts allow us to spew forth from our creative gut those lovely lines that feel so right before we are forced, via editing and revision, to discard those very same lovelies. This is the place for our mistakes to see the light of day – if only long enough for us to learn from them.
Each and every writer strives for that perfect end product. Their masterpiece. These results are nearly never just our own doing. Just as it takes a village to raise a child – it takes a team to raise a book baby. But those first drafts are our proof that we had the what-for to set pen to page. To make our mark. Bravely and alone.  An important first among them all. 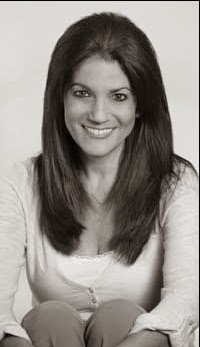 About Louise:
As a young girl who spent her allowance on Nancy Drew mysteries, Louise realized that one day, she might have a story of her own to tell. Maybe even more than one story. After years focused on raising her children she eventually reconnected with her passion for creative writing. She soon began to craft a large collection of short stories which were published in the inspirational online magazine, Faithhopeandfiction.com. Shortly thereafter, she authored her first novel, Wishless, a contemporary YA, released in 2011.

Louise devotes a portion of each day to honing her skills. She has several other novels currently in various stages of development. A confirmed bibliophile, Louise enjoys reading outdoors on a warm spring day and watching her pup chase leaves on a breeze. She looks forward to meeting others who share her love of the written word and invites you to visit her blog, her website and follow her on Twitter and Facebook.

a Rafflecopter giveaway
Posted by Noree Cosper at 12:00 AM 5 comments: