I'd like to Welcome Cole Knightly to Trip the Eclipse.

Hi everyone! I’m thrilled to be here. Today I thought I’d talk about my four favourite creepy covers. I really love book covers because they can sometimes be so amazing that I just HAVE to buy the book. It’s great when that happens. Any way, let’s get on with the covers! 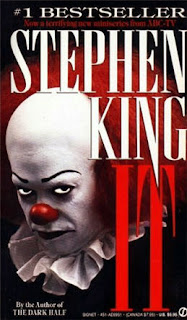 So, my first two covers are actually the same book: It by Stephen King. The first one is an older version that is an illustration of a scene from the book. It’s a scene that to this day scare my poor mother and the reason she totally lost it and grounded me forever when she caught me and a bunch of neighbor boys prying open a manhole cover and taking turns going into the sewer. (We were looking for the Ninja Turtles, okay?!) Just like in the book, its cover plays on that fear of a monster lurking in the sewer trying to lure innocent children into its claws. 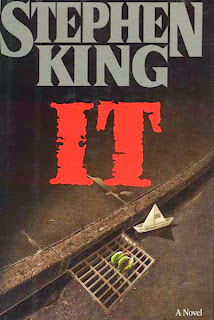 Now, this newer cover invokes fear on many different levels. First, clowns are always frightening. PERIOD. And Pennywise in general is pretty disturbing. Since the 90s, Tim Curry’s portrayal of the most unlovable demon clown has become somewhat of an icon for It. And of course, the artist manipulated the face to make it look extra menacing… as if clowns need more of that. 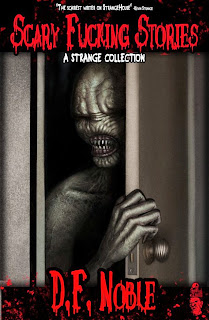 The next book cover is from Scary F***ing Stories. This is a book written by D.F. Noble and contains some pretty weird and creepy stories. What’s great about this cover is the frightening monster peeking its head out from behind the door. It reminds me of the childhood fear so many of us had of monsters in the closet. Also, the creature itself is terrifying. That mouth full of pointy teeth solidifies that. To make it even more scary, the monster appears to be grinning as if the prospect of devouring my soul is not only delicious, but fun too. Yikes! 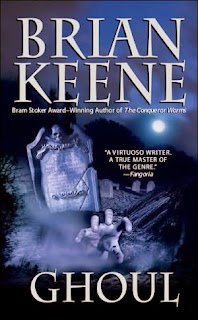 The last cover is for Ghoul by Brian Keene. It’s a bizarre book and the cover just oozes horror. I mean, there’s a graveyard and everything. Much of the story takes place in a graveyard, above and below it, and this cover captures that. Also, it really has some great atmosphere going on with the mist and the cool blue colour. I like that it implies zombie, but it is actually about a ghoul instead. Nice change.

So yeah, these are some of my favourite horror book covers. There are so many great ones out there, it was hard to decide. Thanks for stopping by and indulging me, everyone!

Creep (A Short Story)
Now Available
After ten months in a mental institution with no end in sight, Jenny Crete tells the story of why she was institutionalized. She had started a new job at Ridley Conner Community College and had begun to notice disturbing and creepy things happening in the school late at night. At first, she thought it was all in her mind. But it ended up being something much more sinister lurking in the shadows.

Portrait of a Ghost
Hopeless. Numb. Abandoned. These are all words Victoria has used to explain how it feels to lose her twin sister Lizzy. After receiving a series of disturbing paintings depicting her sister's suicide, Victoria starts investigating the possibility of murder. To make matters worse, she is being haunted by the ghost of her twin. When she enlists the help of Lizzy’s mysterious boyfriend Evan, Victoria takes her place as a life-model at the local art school to get close to the potential killer. If she doesn't uncover his identity soon, she will become his next victim.

Cole Knightly writes horror and supernatural thrillers. His debut short story, Portrait of a Ghost, was released in November 2012. Cole has a Masters in Fine Art with a Creative Writing emphasis and teaches adults online and on campus. His Temple's Gate trilogy is expected to be released in 2013.

Learn more at the Cole Knightly website.
Posted by Noree Cosper at 12:00 AM